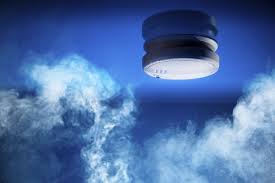 According to the law 2010-238, voted March 9th 2010, every living place empty or occupied will have to be provided with smoke detector equipped before March 8th 2015, call Mademoiselle Julie to install it for you!

WHY IS IT USEFUL?

So to improve the fire safety and reduce the death rate due to fires, the law 2010-238 of the 9th of March 2010, voted March 2014, makes compulsory the installation of autonomous detectors smoke warning in every living place before March 8th 2015.

WHY SHOULD YOU INSTALL SMOKE DETECTORS?

These appliances will enable you to detect the smokes emitted right from the beginning of a fire and moreover a loud warning will be emitted and strong enough to wake up a sleeping person.

WHICH LIVING PLACES ARE CONCERNED?

Every living place whether it is empty or occupied is concerned: main homes, holiday homes, rented private or state lodgings new or old.

This instalment has to be paid by the owner of the lodging whether he lives in it or rent it.

As far as renting lodgings are concerned, the obligations are shared:

A few exceptions: holiday renting, accommodation which goes with your job…..    and host lodgings, the owner has to install and maintain the smoke detector.

WHAT EQUIPMENT TO CHOOSE?

The choice of the equipment is important. Many surveys done by the magazine “60 Millions de Consommateurs” in 2009 and the magazine “Que choisir?” in 2012 underline worrying facts on the sold smoke detectors which are said no to be reliable. So they give us 2 characteristics which are required:

Other characteristics have to be taken into account as well:

The working expectancy of a battery

All detectors are provided with a battery. The working expectancy is said to be:

The detectors with lithium battery are on the life those which are the most interesting financially and as well very handy.

In big houses on several levels, it might be necessary to choose interconnectable detectors. So they will transmit the alarm to all the detectors and therefore to be warned if the fire starts in a room far from the one where you are. According to the model, the link is done with or without a wire.

HOW TO MAINTAIN THE SMOKE DETECTOR?

For every detector there is a button “test” which enables you to check the good working of the alarm, don’t hesitate to use it.

WHAT APPROACH DO YOU HAVE TO DO BY YOUR INSURANCE COMPANY?

The tenant or the owner which occupies the lodging must notify the setting up of the fire detector by giving a certificate to his insurance company which garantees his damage in case of fire.

According to the insurance, if you don’t have this proof in case of fire, you will have to prove that you were in keeping with the law by providing the invoice of the detector or of its installation.

If you don’t have these required papers, your insurance might give you less money or even nothing.

HOW MADEMOISELLE JULIE CAN MAKE THINGS EASIER FOR YOU?

So as to be well protected and in keeping with the law, Mademoiselle Julie offers you to install your smoke detectors.

As this service is in the context of “odd jobs” of the law Borloo and as Mademoiselle Julie is a company recognized “Service à la Personne” N° SAP 751 898 792, for this service, you can have a rebate of 50% on your income taxes according to the law.